Anti-Muslim hate crimes do more than endanger the physical security of Muslim individuals and communities: they instil fear, often preventing Muslims from participating fully in the life of society. Muslim women are especially vulnerable to hate-motivated attacks targeting both their gender and religion. As detailed in ODIHR’s report on the COVID-19 pandemic, the onset of the global health crisis in 2020 fuelled an upsurge in discrimination and intolerance against already marginalized groups, including Muslim communities, and particularly online.

In this context, ODIHR’s efforts to address hate crime became ever more pressing. In 2020, these efforts included the launch of ODIHR’s Practical Guide on Understanding Anti-Muslim Hate Crimes – Addressing the Security Needs of Muslim Communities. The culmination of an extensive, two-year consultation process, the Guide draws on a wide range of views, expertise and experiences to highlight good practices and key principles in responding to anti-Muslim hate crimes. The Guide’s holistic approach goes beyond security considerations to identify how state authorities can foster and sustain societal cohesion through their comprehensive response to hate crimes.

Since its publication, initiatives to translate and customize the Guide have been set in motion, helping to ensure that the publication reflects the security needs of Muslim communities in different OSCE participating States. In addition to English and Russian, the Guide is now available in French, German, Greek and Italian. The COREIS Islamic Religious Community, a leading civil society organization in Italy, is exploring the possibility of incorporating excerpts of the Guide into a training manual for police on preventing discrimination against Muslims, developed in co-operation with Italy’s Ministry of Internal Affairs and the Observatory for Security against Acts of Discrimination.

ODIHR’s work on anti-Muslim hate crimes, including the Guide, was presented to Norwegian officials and civil society during a virtual country visit of Ambassador Mehmet Paçacı, Personal Representative of the OSCE Chairperson-in-Office on Combating Intolerance against Muslims.

"ODIHR’s timely Guide fills an important void by identifying practical steps to address the security needs of Muslim communities in the OSCE region through a victim-centred and gender-sensitive approach. It is evidence of ODIHR’s long-term engagement and expertise on these issues, and can also be applied to tackle hatred targeting other victimized groups."

"Many victims are unfortunately sceptical about the ability and willingness of the authorities to respond to anti-Muslim hate crimes. By developing tools to improve states’ response to such crimes, ODIHR helps to cement trust in the authorities, making the intimidating task of reporting hate crimes that much easier for the victims and their communities."

— Marianne Vorthoren, the former director of the Platform for Islamic Organisations in Rijnmond in the Netherlands. 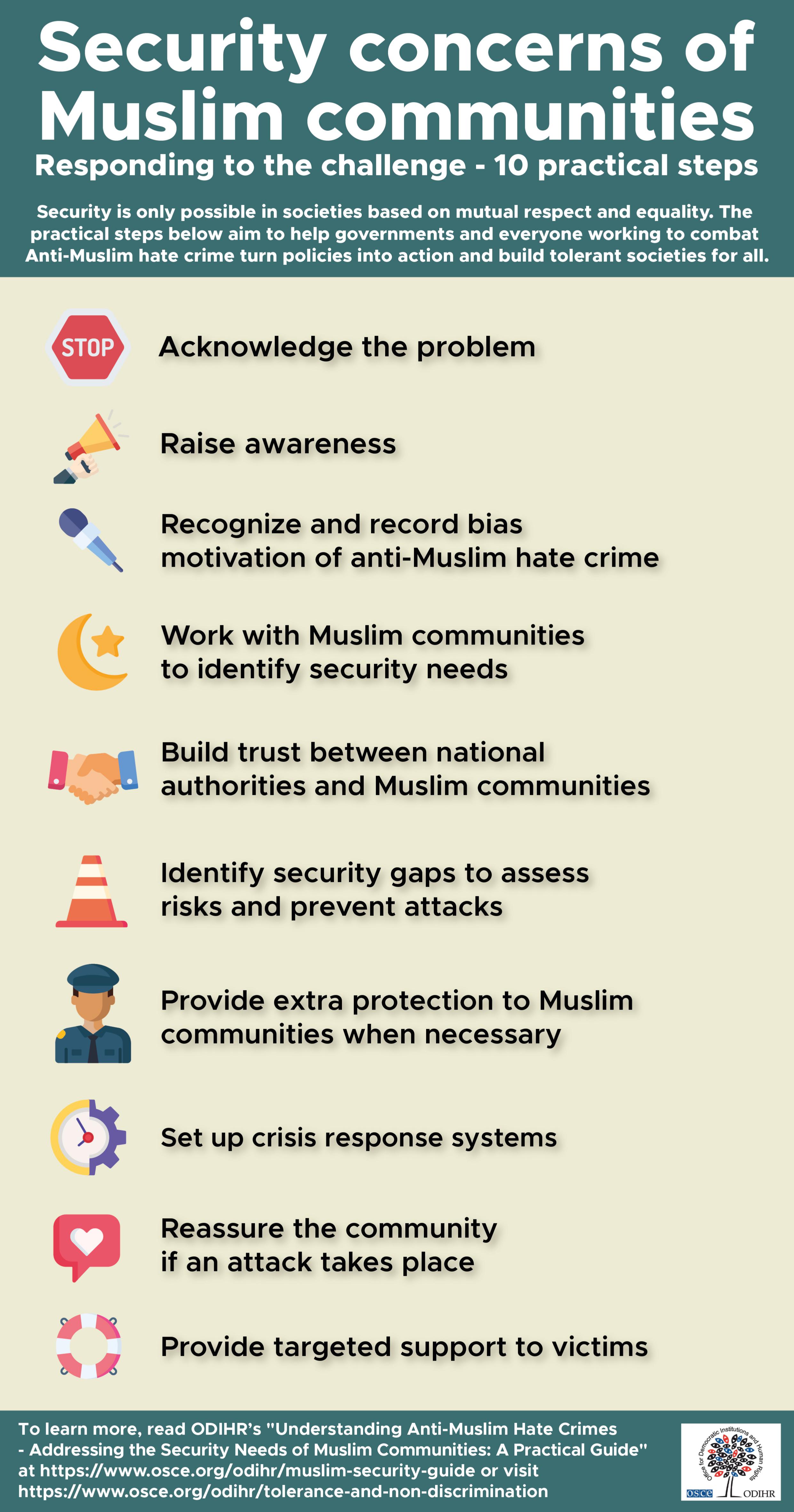