The OSCE Mission to Bosnia and Herzegovina today launched the Supergrađani / Supergrađanke (Super Citizens) platform, an online mapping tool that crowdsources data regarding hate-motivated incidents, responses to these incidents, and initiatives aimed at their prevention. 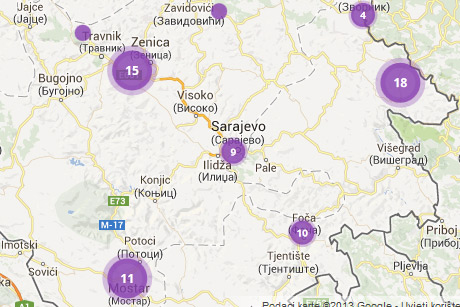 Citizens can report such events by filling out a simple form on the website, via email, or through a mobile phone application. Relevant information can be posted in various formats, including photos, notes, video and audio.

“There is a strong willingness among the people of Bosnia and Herzegovina to improve their communities. Community cohesion requires people to talk openly and constructively about sensitive issues, and to point out problems not as an excuse for inaction but rather as a catalyst for change.” said Alexander Chuplygin, Senior Representative of the Head of the OSCE Mission to Bosnia and Herzegovina.

The interactive map of community conflict and cohesion aims to foster dialogue among local authorities, civil society, and the judiciary in actively reducing the number of bias-motivated incidents. This project complements the Mission's longstanding work to support legislative reform, justice sector capacity and proactive government and civil society responses to hate crimes.

In conjunction with the launch, a workshop was held for municipal representatives and civil society activists from 15 locations across BiH. These representatives, supported by the Mission, are designing individually-tailored Community Cohesion Action Plans that define, prioritize, and tackle sources of conflict.

“Our role is modest, as our local partners are the real leaders of the process,” added Chuplygin. “Local knowledge of problems is an indispensable contribution to evidence-based policy-making, in partnership between the government and citizens.”

*OSCE-ODHIR isn't responsible for the content of external sites.