The second in a series of impact stories looks at ODIHR's work to explore and enhance understanding of gender-based and multiple-bias hate crimes.

Hate crimes target people for who they are or are perceived to be. At the same time, hate crimes are message crimes, and the message of rejection and exclusion in each attack resonates throughout the community, from family members, to those sharing an identity of the victim, to neighbours, co-workers and the public.

In order to develop effective policy responses, ODIHR works to improve understanding of different forms of hate crime. In 2019, the Office focused on gender-based hate crimes, as well as those committed with multiple bias motivations.

While many OSCE participating States submit data on both gender-based and multiple-bias hate crimes to ODIHR, these crimes are often overlooked and misunderstood. Very often, the gender bias element of hate crime is neglected, despite the scope and prevalence of gender-based and multiple-bias crimes. In order to define and categorize such crimes, and to translate key concepts into practical policy measures, ODIHR held two expert roundtables in 2019 for criminal justice staff, academics and civil society representatives.

“Efforts to counter gender-based hate crimes are viewed by some as interfering with a particular social order. But it’s hard to see how any manifestation of hate can be part of a society’s values, and the detrimental, long-lasting impact on the victims of such crimes cannot be ignored.”

— Liesbet Stevens, Deputy Director of the Institute for the Equality of Women and Men in Belgium and a participant in ODIHR’s event on gender-based hate crime

These events examined the application of legal provisions in the 21 OSCE participating States that track gender-based hate crime, and the potential for integrating an intersectional perspective into national hate crime responses. This helped increase the visibility of victims and potential targets of hate crime, and make their voice heard when approaches to countering gender-based and multiple-bias hate crimes are developed. 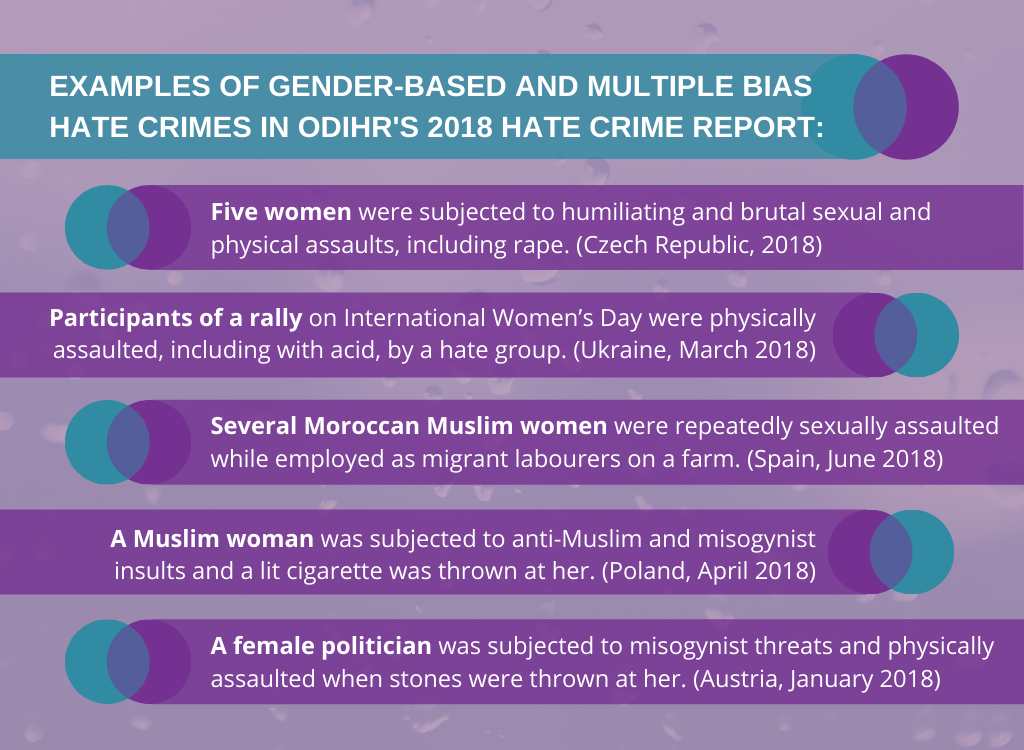